Yesterday, the Macedonian Parliament adopted the new Law on Higher Education, despite the major protests of the students and opposition from the academic community. The new law introduces a “state exam” for students in the second and fourth year, including students who undergo their master studies.

In the past few months, thousands of students protested against the state exam, which according to them, is unconstitutional and interferes with the autonomy of the universities. For more details about the protests click here.

According to the Minister for Education and Science, Abdillaqim Ademi the state exam will start as a pilot-project in 2016/2017, and students will still be able to continue to their third year of studies if they do not pass the exam. He accepted an amendment that proposes the results from the first pilot state exam not to have any legal consequences, before the first real state exam takes place the next year.

During the relatively short parliamentary discussion, the MP Roza Topuzovska – Karevska expressed regret that the MPs did not hear her appeal for the law to be taken off the agenda for voting, which according to her showed that they do not want deep and comprehensive analysis before they begin a significant reform in education.

“[Colleagues] I address you, the law is now in your hands, now we decide whether we will vote a law contradicting the Constitution, whether we will stand in defense of university autonomy or not. They gave us only five lines of explanation why this law should be voted. Is this enough for you? You say it is a serious education reform, and the explanation for it is five lines. Is this enough, respected colleagues, to pass and enact such a law? We have no right! You have an obligation not to ignore over ten thousand students, we don’t have this right!” said Topuzovska- Karevska at the parliamentary debate.

The MP of the ruling party which favors the state exam, Aleksandar Nikolovski, said that he agrees about the dissatisfaction with the quality of higher education, but this is due to the conformity of certain teachers and the way they perceive their work and the competition in the market.

“Not only private, but also for public universities have less quality and more undeserved grades … The professors are often the cause for this. I am sorry they manage to manipulate generations and tell them they should have diplomas, and not knowledge, “said Nikolovski.

The VMRO-DPMNE MP, Ilija Dimovski replied that the debate had also shown a number of arguments that were “for” the introduction of a state exam in higher education.

“As many as there were professors, experts, analysts, associations who were pro the reform, there were as many against it. There are eminent and excellent teachers on both sides”, said Dimovski. According to him, there are student and youth organizations who “thanks to the funding of a known foundation” transform the protest to an anti-government protest.

“It is not what we saw at the beginning … The last two, three protests are more political than student [protests],” said Dimovski.

MP Solza Grcheva said the law is a collection of apsurd, unrelated and inapplicable solutions.

“The introduction of the exam is harmful, needless, teaches students to memorize unnecessary details … the state can not impose exams except for regulated professions that already have it. There are violations of human rights and freedoms with the prison sentences for Deans”, said Grcheva and asked President Gjorgje Ivanov to put veto of the law.

After the discussion, the President of the Assembly, Trajko Veljanoski called upon the lawmakers to submit their votes. Prior to this vote, the MPs expressly passed the changes to the laws on primary and secondary education.

Many students, professors and citizens gathered in front of the parliament before the law was voted and called the assembly – a “crime scene”. The students announced that they will boycott, occupy and block lectures if the MP’s vote the law.

After the law was adopted, yesterday night, the students and professors again gathered in front of the parliament and symbolically buried higher education by lighting candles and symbolizing a “funeral”.

Several months ago, after the announcement of the introduction of the state exam measure, the students self-organized in a horizontal movement called “Student plenum” which initiated several actions, marches and protests against this measure. At the first student march several thousand students marched against the state exam, the second march gathered over ten thousand people, while the third gathering evolved from a march to a protest in front of the building of the Government of Macedonia, where thousands of students again loudly said “No” to the proposal. 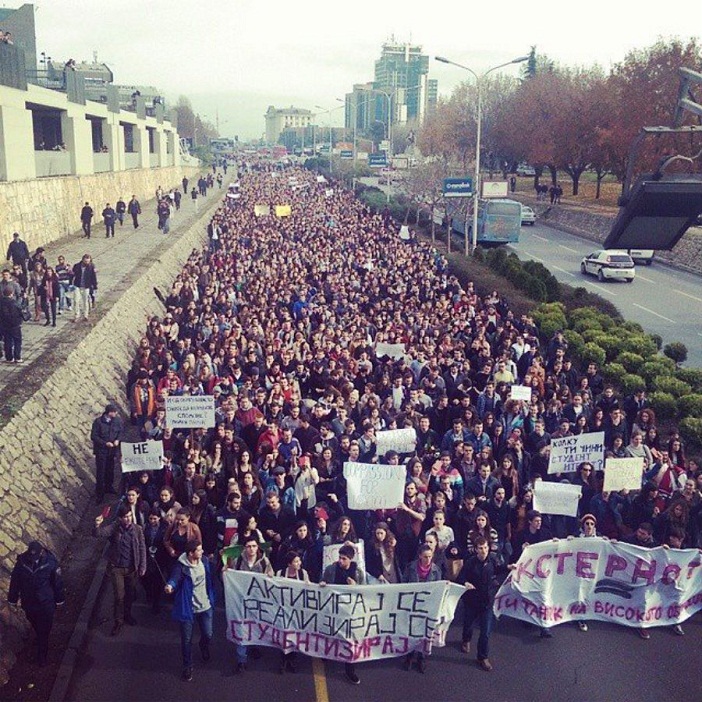 Students received support from many professors, who later formed the initiative “Professor Plenum” which also asked to withdraw the proposed  changes to the Law on Higher Education, to provide a broad public debate on reforms in higher education and to bring a new law for high education. They organized an open plenum in front of the parliament, submitted a letter to lawmakers and urged them to withdraw the proposal. This initiative was joined by 500 professors and assistants, and received support from hundreds of world renowned professors and philosophers like Slavoj Zizek, Judith Butler, Srecko Horvat, Igor Stiks and many others.

Immediately after the establishment of the professorial plenum, a counter-professor plenum appeared in public through the initiative entitled “Citizens for supporting knowledge in higher education”, which supported the introduction of a state exam. Some of its members often give public support to other government measures and policies, so it was criticized that the initiative is formed in order to leave an impression that there is an ongoing debate on the matter. 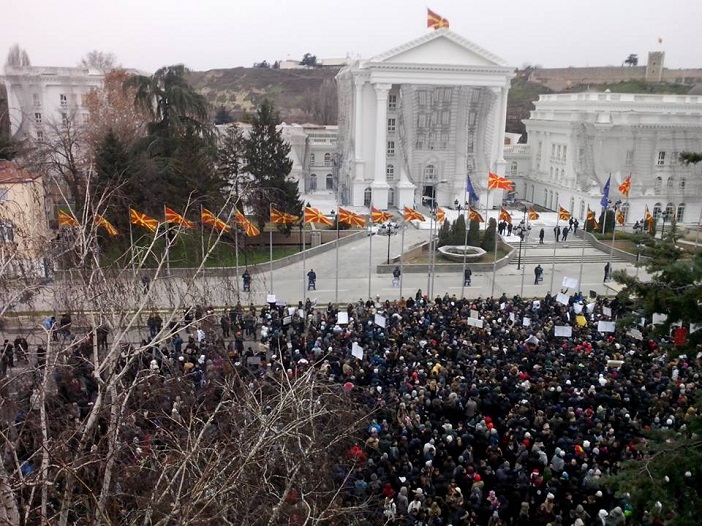 Although students received public support from across the world, the Government ignored their demands. The Minister of Education and Science Abdilaqim Ademi stated that he will organize a public debate in which students will discuss the draft-Law, but the Student plenum was not invited. Half an hour before the scheduled debate on education reforms, which was to be held at the Pedagogical Faculty, the ministry issued a press release which announced that at the same time, the minister will meet only with the deans of pedagogical faculties at the ministry. Prime Minister Nikola Gruevski, however, stated that the student protests were party-motivated, and he did not understand why students protest when there is a state exam in many other European countries. 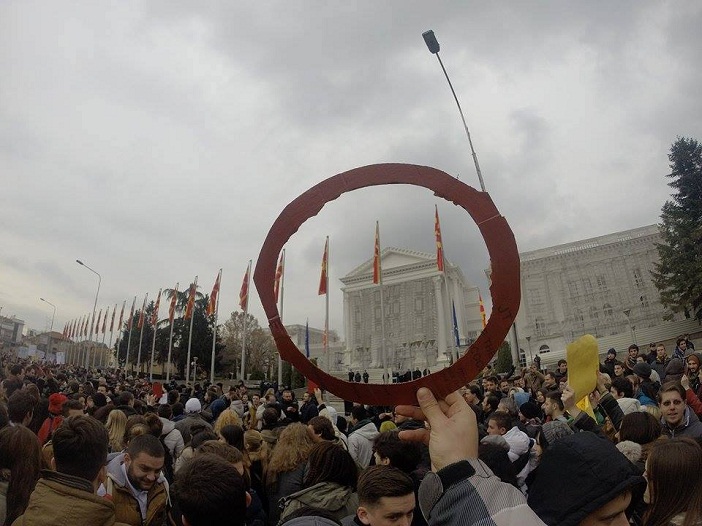 Representatives of the student and professors plenum met with Macedonian President Gjorgje Ivanov, who is also a professor. They demanded Ivanov to veto the Law on Higher Education, but he announced he would “act as a statesman and not a professor”. Students and teachers at the meeting indicated the problems of the Law on Higher Education, such as endangered autonomy of the university, the proposed prison sentences for Deans, pointed out the danger of the proposed video-recording during the exams as a violation of the privacy of students, and warned of a possible polarization of the Board of accreditation and evaluation.They reiterated that the state exam is not a good reform because  rounding A, B, C, D, E, answers can not validate knowledge. According to Bologna, assessment of knowledge is much deeper and broader, and includes research, essays and class participation. Shortly after their meeting, a desire to meet with the president was announced by the counter-plenum as well, after which they also met with Ivanov.

After the adoption of the Law on Higher Education the last possible legal instrument to prevent the introduction of the exam is the veto of the President or not signing the decree declaring the law. Professors plenum again yesterday with a letter asked Ivanov to veto the legislation, which would be returned to the MPs for reconsideration.